Had a quick visit to Starbucks. My first visit to Starbucks in six years. Things have changed. There’s wood everywhere, great little nooks with interesting local designs and plaques to describe the features. The place is well thought out and is much more welcoming than any chainstore I’ve been to before. It’s the new concept store in Amsterdam and I think Starbucks has hit the mark with it’s new concept. Not that the concept extended to coffee. But coffee has never really been Starbucks’ selling point. The new concept store is selling the old Starbucks concept in a sexy new way: a place to hang out with naked wood.
They are pretending to make decent coffee, of course. There’s a corner of the cafe devoted to “experimenting” using a Clover, pourover and cafetiere. Not much experimentation going on here, however. The clover has recipes downloaded for each of the three coffees on offer. There is no override and the only experimentation possible is to brew a Harrar at the settings for an aged Sumatran. Speaking of which, what’s an aged Sumatran doing in the ‘reserve’? Apparently these are rare coffees that cannot be found anywhere else on the continent. Unless you give Greencof a call where they had over 100 sacks of Harrar sitting in a dockside warehouse in Antwerp.
The brew methods available at this crucible of experimentation were “Clover, Slow Pour Over, Cafetiere”. The pourover was a V60 using the Unterüberboiler. The Unter is the version below the Über and involves a lot of work getting the thing to change temperature. Actually, I think it makes a lot of sense. Changing the temperature is another tool we can use to get great flavours out of the brew, but it’s also another variable where things can go wrong. In a cafe environment with a queue of ten, it’s best if things don’t go wrong and we can still play with extraction time and dose. Moreover, the Überboiler is fine for adjusting the temperature up, but pretty slow at adjusting the temperature down. 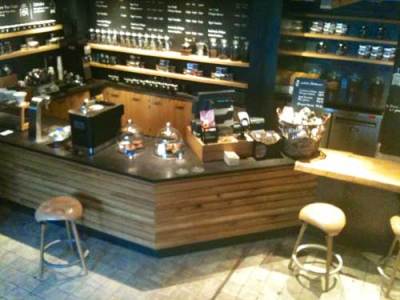 I liked Aryeh, the enthusiastic barista across the counter. He was obviously passionate about his job and his workplace. He told me, with no sense of irony, about the “small batch reserve coffees available nowhere else on the continent” within the ‘slow’ coffee theatre and “testing centre for innovative coffee brewing methods”.  I asked Aryeh for his favourite coffee using his favourite method. I got a short (8 Oz) Harrar prepared by Clover. I was told to expect the ubiquitous Harrar blueberries. I have had some really lovely Harrar coffees in my time, but never, with all the power of suggestion from a world of coffee that is convinced that this is how they should taste, have I tasted blueberries. But perhaps, today, using the celebrated and jealously bought technology of the Clover, with beans handled by the most ebullient extractor of coffee juice that I’d ever met in a chain store, who’s telling me that’s what I’ll get along with delicious acidity, maybe I will taste the fabled berry. I had high hopes. The coffee was surprisingly dull and reminiscent of every other stale over-roasted coffee that I’ve ever drunk. Even after letting the brew cool down its burnt rubber and the tanic flavour of rancid coffee oils overpowered any aromatic that might once have been hiding within the beans.

Honestly, disappointed. I really wanted this to be a new direction. Of course I can do without the competition of a chain that actually brews decent coffee, but if more businesses demand great tasting beans, there’ll be more investment into said beans rather than the emphasis on high yield beans. 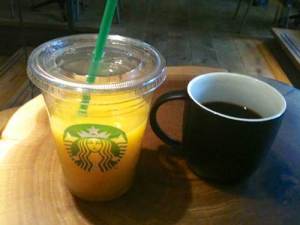 How to get some citrus with a Starbucks coffee

While I was sitting there deciding whether to leave the cup full or to seek out a potted plant to fertilise, I overheard a bloke stood at the counter ordering the same beverage proclaiming to his friends that this was where he’d had the best coffee he’d ever had. About the same drink that I was never to drink. The thing is, Starbucks at The Bank looks the part. It shouldn’t surprise that this experimental shrine to coffee have its devotees. Indeed, it’s no great surprise that it has so many devotees in a world where billions are prepared to believe in crystal healing, gods in the sky, homeopathic treatments and Jesus in an aubergine. For the majority who believe the marketing, this is enough.
The staff at The Bank feel that the customers here are different from the other Starbucks. It’s not because of the coffee. It might be the perception of the coffee. The atmosphere is so different from any other Starbucks that it’s going to attract different people and those people are going to want it to taste different. If a devotee wants it enough, he can make licking a car tyre taste like blueberries, especially if the car salesman believes it as well. 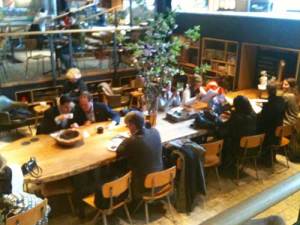 Communal table terminating in a bookshelf. I am actually envious of this feature.

Starbucks has taken a leaf out of the indie cafe scene, but not yet finished reading the chapter. But, it doesn’t have to. Get an enthusiastic enough person behind the counter who can learn and, better yet, believe his lines and most people will believe that their tastebuds are picking up something different. The tastebuds aren’t, but the brain will be and that, to be fair, is a large part of taste.
I’m delighted that Starbucks feels the need to imitate indie coffee houses. At one level it’s flattery, but on a financial level it means that we’re making an impact. Usually, when I visit chain stores, I’m depressed by their sterility, but impressed by their cleanliness and their systems. Sitting in a chain store that wasn’t sterile and counting the number of people handing over their hard-earned Euros, I was very impressed. I’d hire most of their staff in a flash. The recruitment and training (indoctrination) must be very good. As always, we in the indie coffee scene have a lot to learn from the world’s most successful cafe company. It’s something that is self-evident – they’re doing something right, we should continue to learn from them as they are now learning from us.

Coffee for the Mildly Obsessed – The Barista Manual

I’ve written an interactive multimedia barista manual. If you’ve found my writing here worthwhile, you should enjoy the style of this book as well.
Coffee for the Mildly Obsessed

This blog is about my adventures in coffee. If you're interested in reading about agronomy, then I've got an educational section all about varietals, terroir and processing over at Coffeegen
%d bloggers like this: